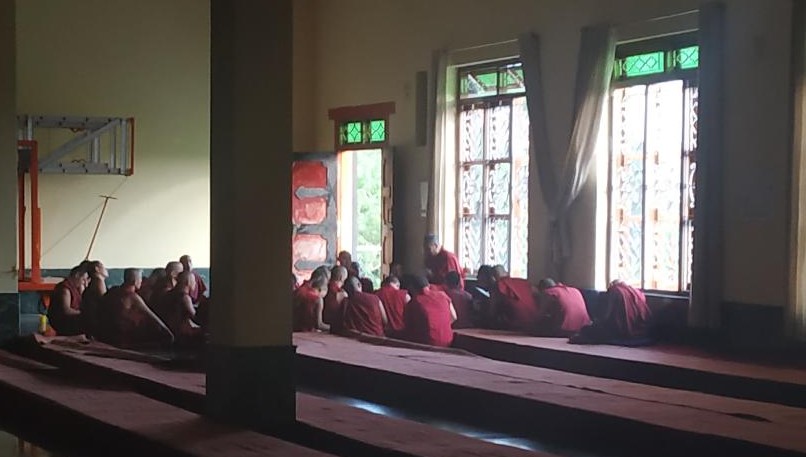 The Gelug tradition lays special emphasis on the place of ethics, as expressed through monastic discipline, as the ideal basis for religious education and practice.  In addition, the Gelug tradition regards sound scholarship as a prerequisite for constructive meditation; hence, the teachings of both sutra and tantra are subject to rigorous analysis through the medium of dialectical debate.

Drepung Gomang College is renowned among all the Gelug Monasteries (Ganden, Sera, and Drepung) for its emphasis on and expertise in the field of logic and debate.

In general, the curriculum of study in a Gelug monastery covers the five major topics plus Collected Topics (Parchen) which is preliminary to the syllabus proper.    The major topics are:

THE FIVE PRINCIPAL TREATISE UNDER THE MONASTIC ACADEMIC COURSE 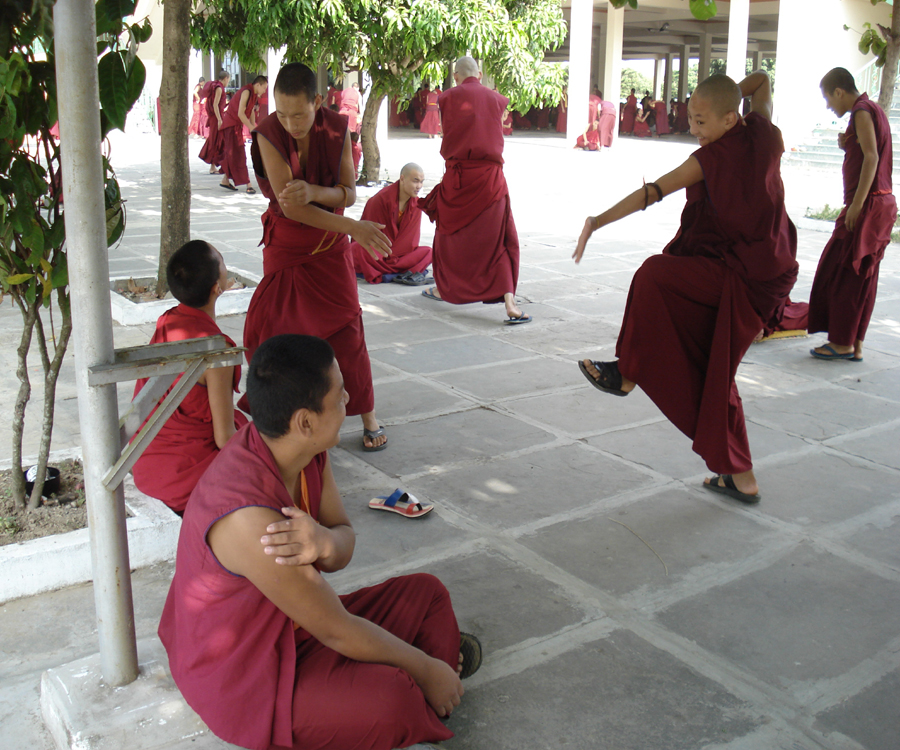 These five courses are studied meticulously by the dialectical method using Indian texts as well as Indian and Tibetan commentaries to them for a period of sixteen years.  After completing these five-course, a monk can pursue further studies appearing on Gelug Examination, a Standard examination for all three Gelug monasteries (Gaden, Sera and Drepung).  Upon successfully passing this exam, the monk is awarded of the degree of Geshe (Doctorate of Buddhist Philosophy: Geshe Lharampa, Master of Buddhist Philosophy: Geshe Dorampa, Bachelor of Buddhist Philosophy: Geshe Rabjampa).  Soon after getting this title, the Geshe will also undertake one year mandatory course either at one of two tantric colleges. viz., Gyumed Tantric college or Gyutoe Tantric College.

If he wishes, upon completing his degree,  the Geshe may join one of the tantric colleges (Gyumey and Gyuto) to study the tantras and thereby complete his formal studies; or he may return to his local monastery to teach, or retire into seclusion to engage in intensive meditation.  A monk who has completed a Geshe's training is respected as being a fully qualified and authoritative spiritual master worthy of devotion and esteem.

Young monks begin their studies around the age of six.  They attend 8 years of classes in the standard subjects of reading, writing, mathematics, science, and history.  In addition, they begin preliminary studies of scripture and philosophy as soon as they learn to read and write.

About the participation in twos from the concerned class in debate presentation during the mass prayer congregations cover the varied core parts of the monastic curriculums: Vinaya; Abidharma; Madhyamika (the concept of self-negation); Madhyamika (the grounded polemical logic that proves the invalidity of self-experiencing consciousness); on Abisamayalngkara (The Perfection of Wisdom) the subjects range as on Choekhor (The Turning of The Wheel of Dharma), Gedun Nyishu (the 20 Sangha grades), Semkei (Bodhichitta), Dhangnei (The right interpretation), Kapshipa (the fourth chapter of The Perfection of Wisdom).

About the scope of the monastic examination, the matters range as: Memorization Test, Debate Test, Writing Test of Buddhist philosophy, Religious History, Tibetan Grammar, and Poetry. The ones who fare excellently in their examinations are presented with prizes during a prayer congregation and those who fail have to remain in the same class to qualify even further in their past year studies.

The recess periods between 8 annual periods of debate sessions as cited above are for memorizing and reciting scriptural texts of one’s concern studying subjects and also for attending teaching classes.