About The Re-establishment of Drepung Gomang Monastic University in India 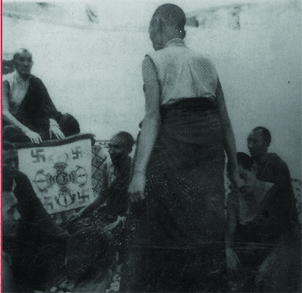 As for the complete invasion of Tibet that shed highly shocking holocausts and vandalisms by Chinese in 1959, Tibetans in huge multitudinous union rose against the ruthless invasion and staged the world-known famous uprising on 10th March, 1959.  And when it was known to Tibetans that His Holiness the Dalai Lama had made his clandestine flight in disguise to India on 16th March, many Tibetans made their flights as like a son after his mother and among whom there were monks from the Three Great Seats who made theirs through Bhutan and others to get to India.

At Buxa Transit Camp: The Beginning

Under the aegis of Indian government’s supports through His Holiness the Dalai Lama’s guidance and guardianship, a certain number of Tibetans were granted asylum with places to live and work for in India. Among them almost around 1500 monks with nuns were gathered at Buxa, situated in the area bordering with Bhutan to re-establish the monastic tradition and studies but in a union body as to undertake an instant preserving measure in consortium rather than parted way. The grouping was later put under the institute named Thoesam Thardoe Ling, a preserving body or institute of Tibetan Buddhist studies. 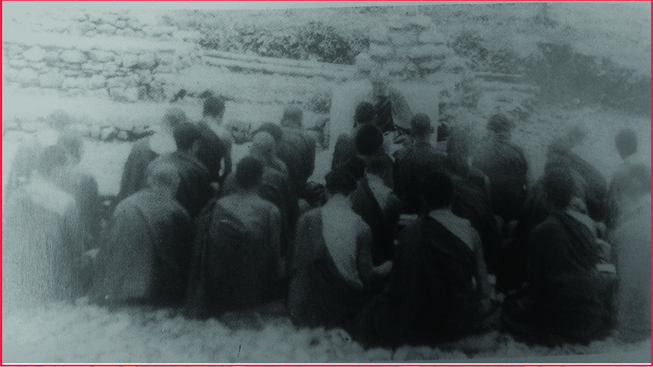 As Gomang had only around 100 monks of its own at the time with its acting abbot Khalkha Kalsang Palden had been seized under the pressure of Chinese brutal approach all over Tibet, His Holiness the Dalai Lama, under his kind guidance, inducted ex-abbot of Gyumed Tantric College Hardong Geshe Ngawang Legdhen as the substitute to take over the position of abbot. The substituted abbot did play such major role in sustaining the monastic unique complex studying system through his skilful means and inspiration. Then the monastery had its own disciplinarian, chant-master and a representative member from each of 16 Khangtsen as to revive its functioning structure step by step. At the time the monastery didn’t have any communal fund and a place to keep its small belongings either. With the prospective view as to restore the future of the monastery the two acting figures began to collect any possible donation in 25 to 50 paise from its own monks and could begin to resume its basic essential spiritual programs like Dolchok (White Tara Puja) on 8th of every month of Tibetan calendar, monthly Dakang and so on. Gradually, in the steps of communal betterment, the major programs of monastic studies like interclass debate congregations (Thuk Chora), overnight mass debate congregations (Tsenphu Damcha), debate presentation in two during a prayer congregation and traditional prayer-programs were able to be carried out.

The handful of monks did work hard at Buxa for 11 years in preserving the unique system of the monastery ranging from its complex study system to any possible significant program regarded major in Tibet. As the time then witnessed extreme rarity in monastic scripts and texts and with the help of the supports by the sympathizers, the monks did work hard in printing adequate texts with the means of Dhopar (a slab-plate print system).

From Buxa to Mundgod South India: The Shift for Permanent Settlement 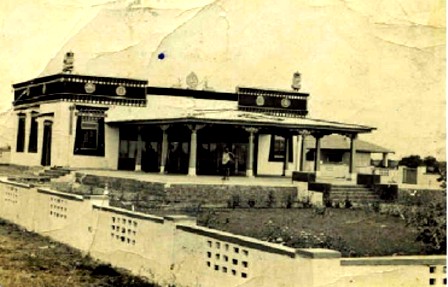 As of the transient changes of harsh weather to harsher ones of Buxa that the monks couldn’t get acclimatized, the place being the bordering defense area that it was hard to attract newcomers, especially the future of the monastery couldn’t rely only on the donated provision of livestock there and on such other reasons, the monastery, under the guidance of the exiled Tibetan government, had to move to South Karnataka State in 1969: Those of Sera College to Bylakuppe; Gaden, Drepung, Sakya and Nyingma Colleges to Mundgod.

At Mundgod, where now Gaden College is, both Drepung and Gaden colleges came to stand together in demarcated right and left zones in tent settlement.

At the time Indian government and charitable trust helped 60 monks of the monastery with the grant of 40.2 acres of land and a canvas-tent among each three heads of all that the monastery began to live on its own through intensive farming works done by the monks. The areas where now Tibetan settlement camps stand were filled with the thickets of semi-rainforests and were cleared through Indian government’s support to create the openings for camp-settlement and fields to live on. The monks did work so hard days and nights to uproot those numerous roots of cut trees as to make the areas usable for the monastic farming fields, housing and communal property. As for the buildings, the monks made mud-bricks and did such many hard labors. During the time to plough fields in springs when the monastery hadn’t any oxen, there were times when two monks had to work in couples to tug plough and sow seeds. The monks did every work of farming, sowing maize, rice, chili, peanut, paddy, lentil…

The monks were, however, able to keep up with every preserving mode of the monastic tradition in studies and programs.

In 1972 Drepung and Sakya colleges moved to the present locations. Under the aegis of Indian government, each two of the monks were granted with a square living quarter of mud-tiles roof. As to continue to get established but under such financial problem, the monastery did seek supports from the relevant native monasteries in Ladhak Zanskar of those Ngari monks, so from USA, France, Swiss, Nepal, Bhutan and within India that, in due course, the first prayer/congregation hall (30×50) was able to be erected in full Tibetan architectural designs with top storey, Gongkhang (the protector deity chapel) and the precinct of debate yard with the walled fence.

As duly requested by the monastery, His Holiness the Dalai Lama first visited exiled Drepung on June 14, 1980 as to impart with his blessings and teachings for 8 days in Drepung Tsokchen (the main communal prayer-hall) on The Great Commentary on Tenets & Sects by Kunkhen Jamyang Shepa.

Later with growing number of new comers, the monastic prayer-hall was renovated widening some 20 ft aback. By virtue of kind sympathizers the volume of Ku-Sung-Thug-Ten(the blessed statues, teachings and stupas of the enlightened and great ones) began to get sufficient so far.

With its population strength of 1700 monks and the former prayer-hall couldn’t house such number facing with incessant problems during a congregation in days with blazing sun and monsoons that the latest monastic prayer/congregation hall (150×189) was completed in full traditional architectural designs later in 2002. The process of decision making for the erection of such giant structure was carried out through mutual and relevant discussions among mass monks, counsel seeking and finally seeking divination-message through the recommended medium of Zinril Takdhil (a means of seeking prediction from the protector deity through rites and offerings) as duly recommended by His Holiness the Dalai Lama. As the divination-message came out positive to erect one for the present crisis, the initial constructional preparation plus fundraising were begun appointing a construction committee of 10 full time executive supervising members. In terms of fundraising and the expenses of the construction, it was able to carry out in its modest sufficient way through the kind guardianship of His Holiness the Dalai Lama, generous sponsors and kind supports/funds raised in USA through the first monastic cultural tour in the West with The Pageant of Jetsun Milaripa (The Shaman of Tibet) and other varied cultural programs. 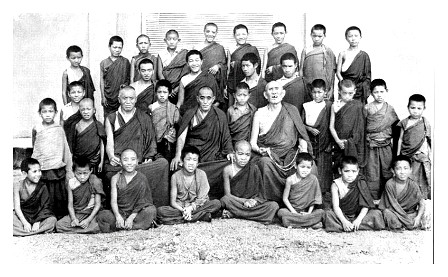 It was erected facing east for a special case of auspiciousness. Unlike the former one the new prayer-hall has four doors in the four corners with railed staircases, the big traditional entrance doorway and wide high wooden door fixed with brass bordering panels etched with traditional carved arts, the spacious interior raised dais for laying the throne of His Holiness the Dalai Lama and others of the monastic abbot and ex-abbots against the backdrop of wide altar with wide glass panels. The altar holds the giant blessed statue of Lord Buddha in the mid as the prime idol flanked by Gyalwa Methukpa on the right (which is flanked by Lord Maiteria on the right that is flanked by Namgyal Stupa on the right respectively) and Jhe Tsongkhapa on the left (which is flanked by Kunkhen Jamyang Shepa on the left). On the patches between those giant statues and niches around are decorated with one thousand mini statues of Lord Buddha and the same of Jhe Tsongkhapa as to sanctify the enclosed shrine in its unique way.

After the completion of the holy structure as duly requested in advance, the monastery could invite the blissful visit of His Holiness the Dalai Lama to impart the inauguration ceremony with his profound presence and cutting colorful ribbons on December 7th, 2002 and the subsequent teachings on Jhe Tsongkhapa’s The Great Commentary on The Root Wisdom by Acharya Nagarjuna for days. The monastery could also invite the Karnataka State minister, the cabinet ministers of Tibetan government in exile and the related guests from India and abroad. The monastery could offer Long Life Puja for His Holiness at the end of the teachings for his endless longevity and prosperity in leading Buddha Dharma for the wellbeing of sentient beings at large.

The monastery could later get registered as per the state government registration Act under the title of Drepung Gomang Education Society, Registered under the Karnataka State Registration Act: 1960NO/DR/SOR/38/98/99

The Rise & Fall of the Monk-Students’ Population 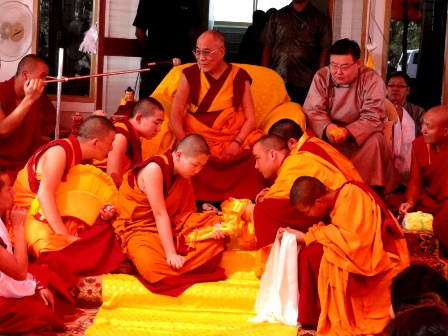 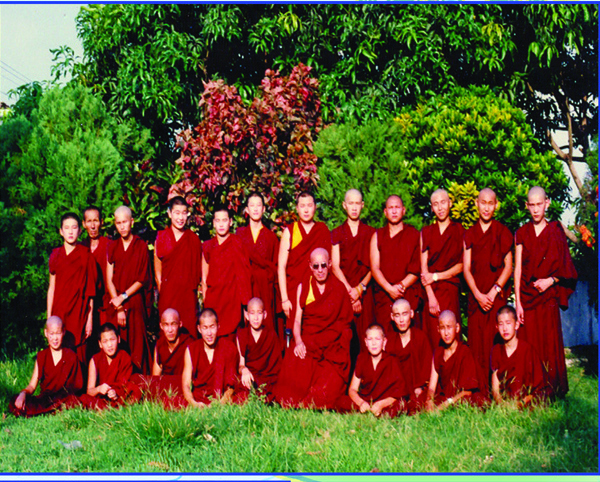 Under the auspiciousness and great dedications of those adept scholars of highly trained minds the monastery had produced ranging from the most eminent ones Drung Dhakpa Rinchen, Khechok Galab, Khechok Taklab, Kunkhen Choejung and his core son-like disciples, Kunkhen Jamyang Shepa, Gungthang Tenpai Donmei…, the monastery could recruit more and more ardent monk-students that it was known that the monastery had 5000 monk-students during the great prayer festival in Lhasa in 1958. As cited above, after the invasion, there were only around 100 monks at Buxa transit camp and in 1969 when the monastery moved to South it had only around 60 monks. But in gradual process of time and wellbeing of the monastery utterly shouldered by the handful of monks (now respectfully called Buxa aged monks), it could garner young students from the local Tibetan camps, Ladhak, Mon (in Arunachal Pradesh State) and Himalayan regions that it gained the population strength of 300 monks.

After the application of freer version of Chinese Policy in general in the late 1980s, the monastery began to gain new comers from Tibet in limited perpetual influx that by 1990 it had 475 students. Then later beginning from the mid 1990s it began to receive students form Mongolia, Kalmykia, Buryatia and Tuva Republics that it had around 1000 monk-students in 1995. Presently it has more than 2000 students.