Drung Dhakpa Rinchen, one of the eight closest disciples of Jhe Tsong Kha Pa who were known as the eight upholders of Buddha Dharma with their vast knowledge in both grounds, who professed as the best mind in the vast knowledge-field of Buddha Dharma, both Sutric and Tantric teachings, presided over as the first teaching master of Drepung Gomang monastery. He, as in accordance with the instructive lead of Jamyang Choeje, began by imparting with the teachings, both by Lord Buddha and his Indian adept followers/scholars, of vast Buddhist thoughts and science that left this unique vestige for the coming Gomang students: To study the texts of Jhe Tsong Kha Pa and his closest adept disciples and of Kunkhen and his son-like closest disciples as to wield as the key to open the treasure safe of the texts of the Indian Pundits and thereby to open the treasure safe of Lord Buddha’s profound teachings. 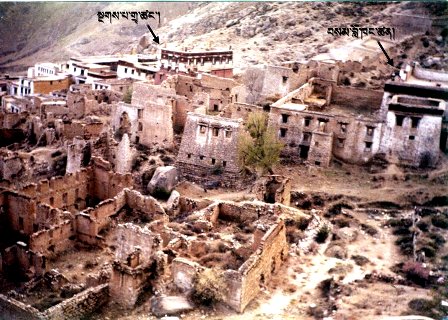 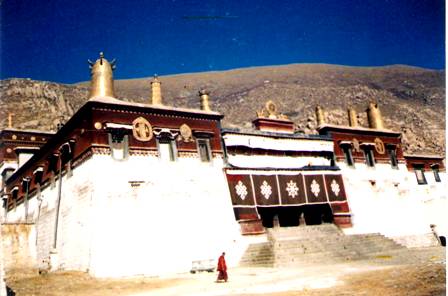 The relevant fact of how this monastic university came into known as Tashi Gomang is as follows: As it is the first in rank as cited above that marked as the outset of great learning center and from its significant example came the following six colleges, the first phrase Tashi responds to its initial auspiciousness; Gomang responds to its possession of many great minds that explored through the many doorways of vast Indian and Tibetan Buddhist works.

As in the work of His Holiness the 5th Dalai Lama, he praises:

The radiantly intuitive reasoning means
That pervade through the deep insights of Dharma-works,
The myriad doorways of the knowledge field,
What the enlightened ones and the sons extol.
And the commune of such practitioners and learners,
Pray that those great mastery minds bear longevity ever!

And here the commune refers to Tashi Gomang and the latter phrase is revealed.

When Drung Dhakpa Rinchen, the closest son-like disciple of Jhe Jamyang Choeje, took over as the teaching master of Gomang college, Kunkhen Musepa, one of the two core adept disciples of Jhe Tsong Kha Pa, acted as the additional master who taught and learned and there happened the dramatic competitiveness between the two great minds that fuelled the furthering of deeper learning and contemplation. It was, however, of the case of the latter great mind’s rather twisting misinterpretation of the ultimate realityEmptiness with its touch with the alien interpretation known as Shentong that he was academically criticized or disturbed by some and also when the time had come for his founding Ser Jeh college that he hurriedly wrote his poetic piece Yonten Kyilkhor (The Mandala of Knowledge) that extols and evokes the adeptness and sublimity of Body, Speech and Mind of his root-master Jamyang Choeje, and left involuntarily towards Sera from Drepung. And later, some senior monks/Geshe, who were his students, of Gomang followed him to Sera and thereby Sera Jeh college was founded.

At later stages, Gomang produced many great minds like scholar Galab, Taklab and so on and by their great talents and dedications many students from different parts of Tibet and Mongolia came into influx. The monastery prospered rampantly in upholding Buddha Dharma through its unique system.